Mass migration as a travel business

Busing migrants to DC costs $1400 each

Afghans between Turkey and Greece

Risk and crisis management on Titanic

Tips on navigating this site Questions, comments on this site

The Business of Transatlantic

Migration between Europe and

reviews of the book

For more on refugees, see also: here, here and here

Source: UNHCR daily reports. From the war's onset, UNHCR reported "refugees fleeing Ukraine," by country, and as of late April, "Ukrainians entering Ukraine." By June, reports were of border crossings (flows) and registered refugees (stocks) by country. These figures indicate that most border crossers were refugees through June, and that net flows from Ukraine have been perhaps 1/2 of gross. Flows to Russia grew from 10% of Poland in March to near 40% by Sepember.

40 thousand migrants arrived by sea into Europe during the first half of 2021, most of them Afghans. Some are being "pushed" back and forth at sea between Greece and Turkey and Turkey has recently installed a 40km fence and surveillance system on its land border with Turkey (NY Times, 17 July, 2021, BBC, 21 August, 2021)

One million migrants and refugees entered

largest movement of people on the

"The worst refugee crisis since the Second World War"

Europe needs to assist Turkey [and Greece] with managing refugees

"European governments in melt-down over an inoffensive" pact; "symbolism over toothlessness"

"It has become impossible to have a level-headed conversation about managing migration in Europe." 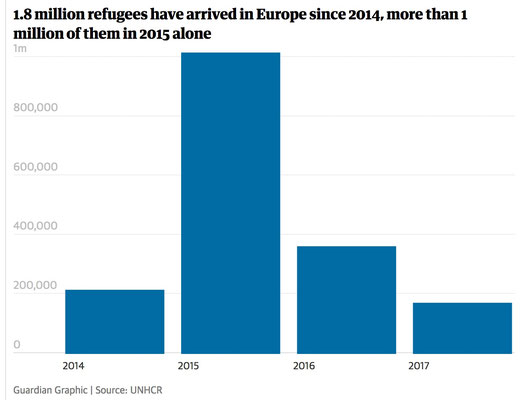 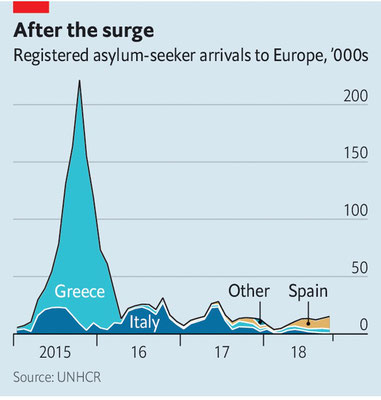 Matteo Salvini's refusal to let the rescue ship Aquarius land 600 migrants in Italy comes in the wake of deadlocked attempts to reform EU asylum policies. With member states in disagreement on refugee burden-sharing, "Europe's capitals are exploring alternatives."  Germany plans to unilaterally tighten its asylum system. Austria is "working informally with Denmark and Netherlands" on plans for "camps for rejected asylum seekers outside the EU."

in almost permanent conflict. Tusk will [now] call on EU governments to take

charge, rather than leaving Brussels to set the pace in managing refugee policy.

"Only member states are able to tackle the crisis effectively."

If those who come -generally speaking, the poor and needy- are unable to enter the house of Europe through the front door, they'll keep making their way in through the back windows.

In Syria, security forces report called for his imprisonment. Refugee camp in Turkey: "physically alive but psychologically dead." Borrowed $5-7 thousand to pay smugglers for trip Turkey to Greece..."My family is now with me in Leipzig, Germany...for the first time in my life, I feel like a real scientist."

European court of justice does not require issuance of humanitarian visas to Syrian refugees  Economist, (11 March, 2017 )

"For now the smugglers' business model is safe."

Stranded on the doorstep of Europe Los Angeles Times, (5 March, 2017)

"I have to keep trying. I'll never go back to Afghanistan. Sometime in the future, when I sit in a warm place, I'll think back on this and remember everything."

-Tariq Stanikzay, formerly a shopkeeper at US military outpost in Afghanistan, who

has tried six times to get into the EU from Serbia, and who now lives in a metal

shed behind the main train station in Belgrade.

Death toll reported by International Organization for Migration (IOM) and UNHCR, which estimates total Mediterranean deaths for 2016 at over 5000 (mostly between Libya and Italy), compared to 3800 in 2015. Hundreds, however, have also been rescued recently in operations supported by the Italian coastguard and Spanish navy. Video details recent rescue efforts by Médecins Sans Frontières and SOS Méditerranée bringing 112 migrants aboard ship Aquarius. Asylum-seekers reaching Italy by boat in 2016 are at an all-time annual high.

Save the children rescue from dinghies off Libyan coast. BBC (Oct. 4, 2016)

Bono: Hope is not lost, but is getting impatient. We should be too.

could also be a productive benefit. Shore up development assistance

to sending countries before they spiral into anarchy.

"Every element of the arrangement is politically, legally or morally problematic...but it is Europe's best option."

Turkey accepts one refugee returned from Greece for each one taken directly from Turkey to Europe, as quid pro quo for more funding, visa liberalization for Turks visiting Europe, and accelerated consideration of EU membership.

Schengen border-free dream at an end?

Recent Taliban military successes in Kunduz, concerns about curtailment of Balkan transit routes, and acceleration of smuggling operations (also exporting opium from Afghanistan, the world’s largest producer) are said to have helped sharply increase the influx of Afghans to Europe. In Germany, a leading destination, some 30 thousand Afghan asylum-seekers arrived in October 2015, roughly equaling the nine month total from January to September. In Greece some 60 thousand arrived in October, double the September number, and second only to the entry of Syrians. German officials have warned that “not all” Afghan arrivees can expect to stay there. It is

also noted that Germany has contributed 2 billion Euros to “civilian projects” in Afghanistan and 54 German soldiers have been killed there since 2001, “the

biggest toll of any German deployment abroad since 1945.”
In the first week of November, some 650 Afghans entered Switzerland: three quarters seeking asylum by entering through its eastern borders, and one-quarter having been registered (but not accepted for asylum elsewhere in Europe). Afghans were also nearly three quarters of all asylum seekers arriving at those eastern checkpoints. According to one Swiss border agent, migrants hear through personal networks of delays in entering Germany, and head to Switzerland instead. The Canton of St. Gallen has emergency accommodations for 1,000 (fully occupied, however, as are currently most other currently available facilities in Switzerland). Recently, about 2 thousand Afghans per day have been reaching Germany.
Schweiz am Sonntag, “Flüchtlinge kommen via Deutschland in die Schweiz” (Nov. 7)
New York Times, “Afghans arriving in Germany…” (Nov. 10)
Tages Woche (Switz.) “ Flüchtlinge aus Afghanistan…” (Nov. 10)

“ Angela Merkel's response to the migrant crisis is less emotional, and more risky, than it looks...less strategic vision than piecemeal reaction... Europe's most powerful politician seems destined to be shaped by events rather than help shape them...a leader who will chance her way through crises... The Merkel paradox: that such a rational politician can be so hard to predict.”

Greek islands likely to have migrants “no longer just passing through"

About 1,500 migrants per day have been arriving at the Greek island Samos, near Turkey. “Those describing themselves as Syrian...wait for up to three days to obtain

registration papers, and then head to Athens.” Others wait an average of 10 days in an “old military base” where over 1000 are housed in space intended for 200. “Those who can afford it stay in hotels.” The crowded conditions are contributing to poor sanitation, lack of cleaning facilities, “hygiene issues”  and “health problems.” To reduce the migrant flow through Balkans, the EU plans to support  processing and screening asylum seekers in Italy and Greece. Samos and four other Greek islands plan permanent reception centres by the end of November, and officials there are “worried about” the impacts “when vast numbers of migrants are no longer just passing through.”

Officials in Europe “struggle to gainsay” points made about mismanagement –“Greece merrily nods hundreds hundreds of thousands of refugees up to Europe”…Germany apparently "opens its doors one day" and tightens its borders the next… plans to redistribute 120,000 asylum-seekers start to "look irrelevant"…Spurred by such “awkward questions,” a “grand bargain may be in offing: strengthen the EU’s external borders…in exchange for smoother functioning” of the Schengen zone and “burden-sharing” of refugees. But, "the biggest task of all” remains: integrating the many already arrived migrants “who Mr. Orban says will undermine the civilizational roots of Europe. Here, if not elsewhere, Europeans must prove Hungary’s prime minister wrong.”

Hungarian border town mayor, in video, encourages migrants in Serbia (enroute to Austria, Germany) to travel via Croatia and Slovenia instead of Hungary (NY Times 19 Sept. 2015).

Alterations in border restrictions can indicate wider change, as with the Berlin Blockade in 1948 and the  the Austrian-Hungarian border-opening in 1989. New border controls by Germany and Austria could now presage the demise of the Schengen free-travel area in Europe. More..

Pope Francis: Every Catholic parish in Europe should

The Other Austria Shows Itself: Over 3,500 asylum-seekers arrive in just in a few hours

It is as if another Austria has come to the fore. After months of political wrangling and hate-laden on-line commentaries, the 71 dead refugees found in an abandoned truck last week shocked the country. Hundreds of volunteers in Austria have long been active helping refugees, but until last week’s tragedy they were quieter than the polemicists.

MV Phoenix volunteers save over 8 thous. in 8 months

Entrepreneurs to the rescue  Outside Magazine (Sept. 1, 2015)

Helping smuggle migrants from Africa to Europe across the Mediterranean is not legal. Helping rescue migrants swindled by those smugglers is not just allowed, it is encouraged. “I realized that I was good at doing the impossible,” says the founder and founder of the NGO which deploys the 131 foot rescue vessel Phoenix.

Migration in the news